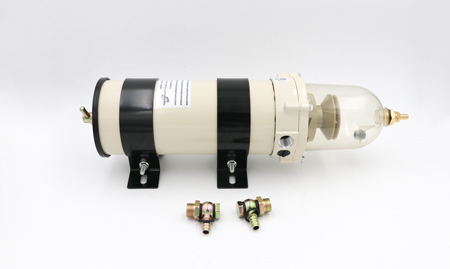 The air filter is located at the front end of the engine's air intake system. It is an assembly composed of one or several filter components for clean air. Its main function is to filter out harmful impurities in the air before the air enters the cylinder of the diesel engine to reduce the early wear of the cylinder, piston, piston ring, valve and valve seat.
The filter housing material is metal or plastic. The material of the end cap of the filter element is metal or polyurethane. Under the rated air volume flow, the original filtration efficiency of the filter element should not be less than 99.5%. Due to the harsh working environment of heavy vehicles, its air filter must be multi-stage.

The oil filter is located in the engine lubrication system. Its upstream is the oil pump, and downstream is the parts that need to be lubricated in the engine.
Its function is to filter out harmful impurities in the oil from the oil pan. Use clean oil to supply crankshafts, connecting rods, camshafts, superchargers, piston rings and other motion pairs. Play the role of lubrication, cooling and cleaning, thereby extending the life of these parts. The filter materials used in the oil filter include filter paper, felt, metal mesh, non-woven fabric and so on. It is required to be able to withstand greater working pressure and should withstand higher oil temperature.

The function of the fuel filter is to filter out harmful particles and water in the engine's fuel gas system to protect the fuel nozzle of the diesel fuel injection pump, the cylinder liner of the combustion cylinder, the piston ring, etc., reduce wear and avoid clogging.
Its working pressure and resistance to diesel temperature are lower than those of oil filters, and its filtration efficiency requirements are higher than those of oil filters.
The filter element of the diesel filter mostly uses filter paper, and some also use felt or polymer materials. In addition to filtering mechanical impurities in diesel, a diesel filter also has an important function to filter water. The presence of water is extremely harmful to the diesel engine fuel supply system, rusting, abrading, and jamming. It will even worsen the combustion process of diesel in the combustion cylinder. The lower part of the filter is equipped with a sedimentation chamber. When the water accumulates to a certain amount, the valve should be opened to release the water. Meiruier diesel filter can effectively filter out impurities and moisture, and protect the diesel engine combustion system.

2．The hazards of inferior filter elements


Due to the uneven quality of filter manufacturers, the filter originally filters the harmful impurities in the various substances entering the diesel engine, so that the engine can work normally under various working conditions and can reach the specified service life. However, counterfeiting, especially inferior filters, not only fails to achieve the above effects, but also brings various hazards to the engine.

The common hazards are as follows:

1．Use low-cost filter paper to make the filter element. Because of its large pore size, poor uniformity, and low filtration efficiency, it cannot effectively filter out harmful impurities from the substances entering the engine, causing early engine wear.
2．The use of low-quality adhesives can not be firmly bonded, resulting in a short circuit at the filter element bonding; allowing a large amount of harmful impurities to enter the engine, which will reduce the life of the diesel engine.
3．Replace oil-resistant rubber parts with ordinary rubber parts. During use, due to the failure of the internal seal, an internal short circuit of the filter is formed, which makes some oil or air containing impurities directly enter the engine, resulting in early wear of the engine.
4．The material of the center tube of the oil filter is thinner instead of thicker, and the strength is not enough. During use, the center tube is sucked and collapsed, the filter element is damaged and the oil circuit is blocked, resulting in insufficient engine lubrication.