The diesel filter is generally changed twice, the oil is changed once, and the fuel-water separator needs to be drained frequently. Change once every six months, depending on the situation: 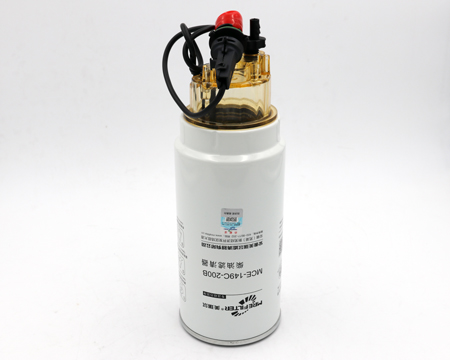 1. The fuel-water separator is mainly based on the density difference between water and fuel, and uses the principle of gravity sedimentation to remove impurities and moisture. There are also separation elements such as diffusion cones and filters inside;
2. The fuel-water separator also has other functions, such as pre-heating the fuel to prevent waxing, filtering impurities, etc.;
3. It is a kind of fuel filter, and its main function is to remove the moisture in the diesel, so as to reduce the failure of the fuel injector and prolong the service life of the engine;
4. The fuel-water separator can only separate the fuel from the water and separate the water in the oil, which has a certain effect on improving the engine oil burning.

Function and principle of diesel filter：
1. The diesel filter filters out solid impurities such as iron oxide and dust contained in the fuel, thereby protecting the oil pump nozzle, cylinder liner and piston ring, which not only greatly reduces wear, but also can avoid blockage;
2. The role of the diesel filter is very important. The sulfur content in domestic diesel is very high. If there is no diesel filter, sulfur will directly react with water to form sulfuric acid, which will corrode the internal parts of the engine. Therefore, the diesel filter is extremely important;
3. The working principle of the diesel oil-water separator is that the oily sewage is sent to the oil-water separator by the sewage pump, and the large oil droplets of the diffusion nozzle float up on the top of the left oil collection chamber. The sewage containing small oil droplets enters the corrugated plate coalescer in the lower part, and the aggregated oil droplets form larger oil droplets to the right oil collecting chamber;
4. The sewage containing the oil droplets of smaller particles passes through the fine filter to remove impurities in the water and enter the fiber polymerizer, so that the fine oil droplets are aggregated into larger oil droplets and separated from the water. The clean water is drained through the drain port, the dirty oil in the left and right oil collection chambers is automatically drained through the solenoid valve, and the dirty oil separated in the fiber polymerizer is drained through the manual valve.